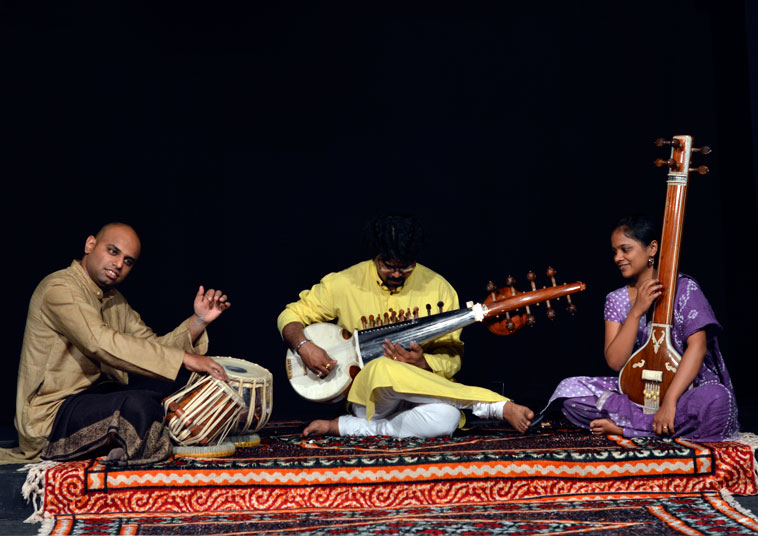 “The Sound of the Sarod”. Along with the sitar, the sarod is the mainstay instrument of Hindustani (northern Indian, Bangladeshi and Pakistani ) classical music. The instrument is known for a deep, weighty, introspective sound, in contrast with the sweet, overtone-rich texture of the sitar, with sympathetic strings that give it a resonant, reverberant quality. It is a fretless instrument able to produce the continuous slides between notes known as meend, which is important to Indian music.

The “Son de Sarode” trio has been performing together for the past 5 years, with a goal of spreading happiness and peace through good and peaceful music. Anupam Joshi displays his classical raga unfolding capacities on the sarod and Anoop Joshi provides a strong base with his steady tempo along with lightning fingers on the tabla. Sayli Kulkarni plays the tanpuri, which is an Indian drone that provides a strong base note as a foundation for the whole performance.

Performance time can vary from 3 mins to 3 hours or even more. The sarod is the lead instrument and the tabla and tanpuri are accompanying instruments. The performance starts with the sarod playing a small solo where a selected set of notes are played in a very slow tempo: this is called playing the alaap of the raga (raga means the selected set of notes). Each raga has a very different mood but the unfolding of the notes of any raga is always determined by the rules of Indian classical music. The sarod player increases the tempo and then both the sarod and tabla play permutations and combinations of syllables in a given set of beat patterns. The tempo of the performance always goes from very slow to very fast. All in all the performances are improvised and are not “compositions”.